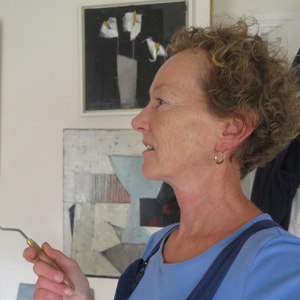 Born in Yorkshire in 1959, Ann graduated from Canterbury College of Fine Art in 1987 with a BA Honours degree in Fine Art. After taking a studio in Faversham for three years and a period of travelling in Spain, she settled in London and had a studio in Tulse Hill. Ann worked as a gardener to support her painting and extensive travels to Nepal and India. Her paintings were accepted on several occasions into the Royal Academy Summer Exhibition, Discerning Eye Exhibition, New English Art Club and the Royal Society of British Artists at The Mall Galleries in London. Her work was exhibited around the UK and she had a solo show in Bergen, Norway at Gallery Urd during this time.

Ann works mainly in oil on linen, canvas or board. The painting surfaces are prepared first with layers of gesso and then colour. This under-painting is integral to the finished piece - it is revealed through glazes and impasto paint manipulated with palette knives, cloths and brushes. The still-life paintings are a direct response to the things around her studio. Flowers, pots and other vessels. Ann’s still-life paintings have, she says, been influenced most by William Nicholson, Manet, the photographs of Charles Jones and William Scott and the St Ives School.

Although the work is now still-life, the landscape is still evident. Living in West Penwith, minutes from arguably one of the most beautiful stretches of coastline in the world, it seems to nevertheless creep in to the paintings through her choice of colour, tone and line. But by not directly painting the landscape where she lives, Ann has chosen to keep the coast paths as her place to walk, relax and think.

Ann ends each day by cleaning her brushes and palette knives onto newspaper. But this is actually the start of her process, as she uses these marks on as a beginning point for the little paintings that become her source material. These small sketches, done in minutes or hours are made in a completely pressure free way, allowing complete freedom. Although they are sometimes done quickly, all are beautiful. They are so important to Ann’s process and so closely linked to her finished work that she feels like she could no longer work without them. Of course not every one of these little paintings will make it to become a larger piece, but each one is a vital part of her everyday working practice. After some time pinned up on the studio wall, the sketches are then pasted into notebooks.

Recently, Ann has been using old diaries for her sketches. Not sure whether to keep them or throw them away, but certain she didn’t want anyone else to read them, she came to a decision…

“I’m revisiting, reading that day…and painting over it. Some of those pages will turn into paintings. This feels like a strange kind of liberation. To reread and eradicate old diary entries with paint.” Ann Armitage 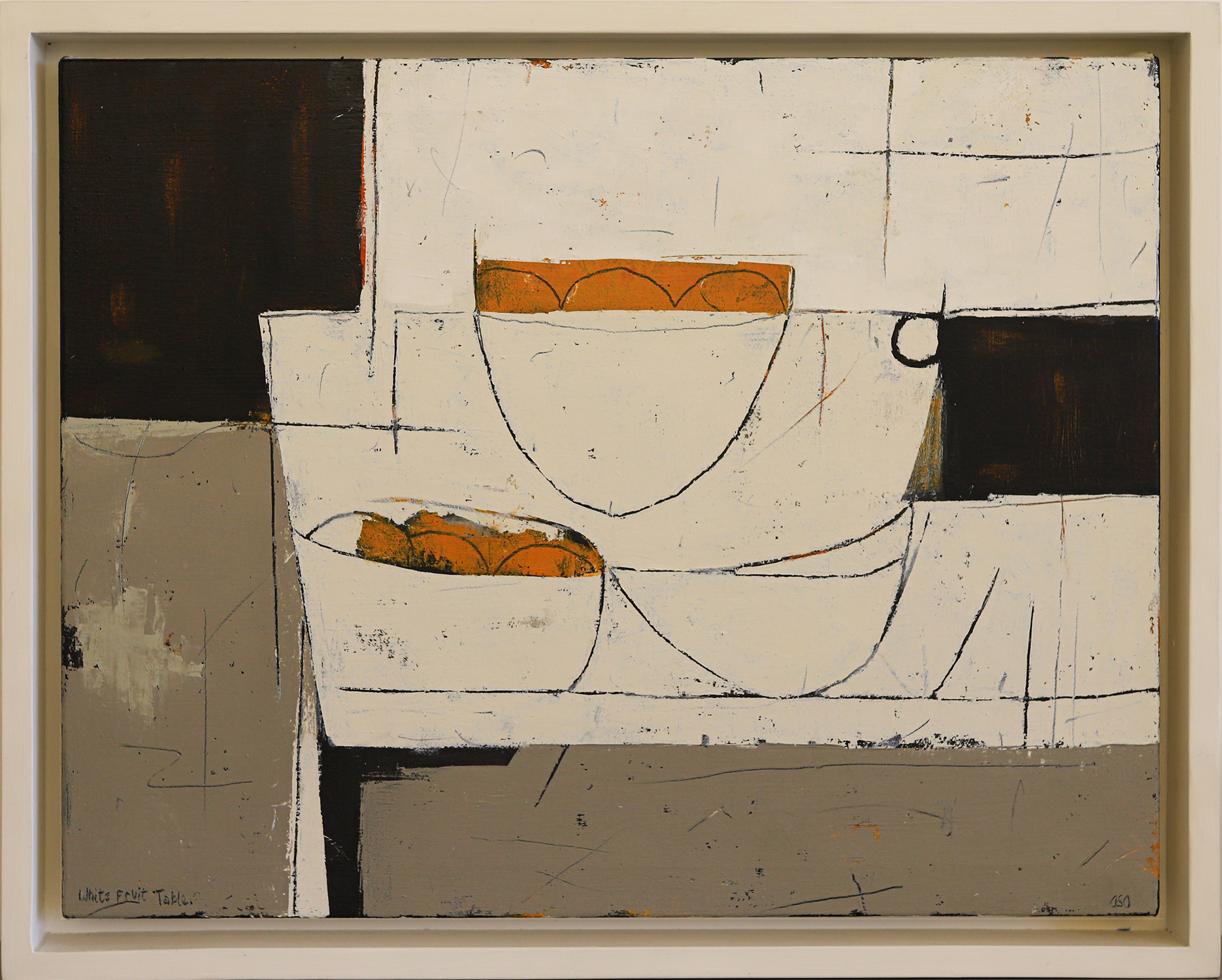 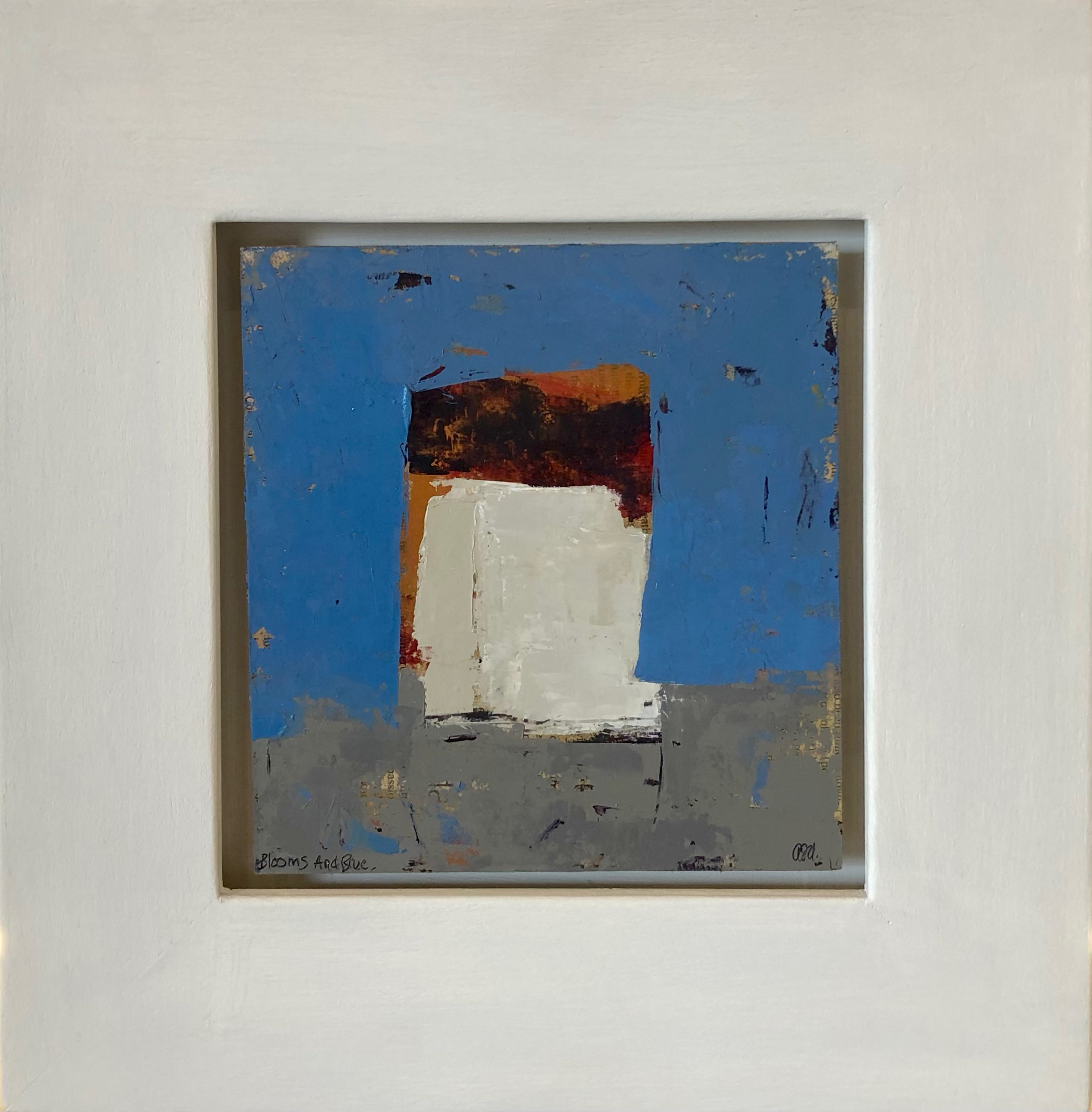 Oil on paper on board
17cmx16cm

Richard Cook is a leading British painter. Exhibiting for over 25 years, in 2001 Richard was given a solo show at Tate St Ives. He has received awards from The British Council, The Arts Council and The Elephant Trust. Richard’s work has been shown all over the world, and is now held in permanent collections at The Tate in London, The British Museum, Manchester City Art Gallery and with Deutsche Bank, London.

Born in Cheltenham in 1947, Richard Cook spent much of his early childhood in Sri Lanka. He trained at St Martins School of Art from 1966-1970 and then at the Royal College of Art until 1973. He was at first influenced by teacher and mentor Leon Kossoff with whom he shared a studio for three years in the 1970s. But he found his own style, inspired by the land and seascapes of Cornwall, when he moved there in 1980. Richard Cook lived for many years in Newlyn.

Richard Cook has long been preoccupied with the human presence in nature. Making regular walks where he produces quick sketches, which provide, in his words, “an energy which is the impetus for the works in the studio.” Working mostly in oils and often using an impasto technique, Cook often cites the power and influence of memory as being important to his technique. The malleability of the paint becoming a way to expose memories that have, until then, been concealed within him. He says that he doesn’t need the landscape around him to produce a landscape painting, but needs to experience a place with all his senses to create an image in response.

"Images already exist within oneself... I have to know a place so that I can forget it, creating a painting which is, in effect, an aspect of myself." Richard Cook

We’ve been lucky enough to have been given permission to show this retrospective group of Richards paintings from a private collection. These paintings haven’t been displayed to the public for some years. These eight paintings are an overview of Richard’s time in Cornwall and the South West and give an insight into his work during the period 2000 - 2015. This show is a unique opportunity to acquire a painting from this important British painter.

“It is wilderness that inspires me. I paint the land, sky, the ocean, and tree. My subject is the seen world of nature. The horizon disappearing behind the ocean; the land curving into a strange tilt; and the air buzzing with an ecstatic presence as a chant humming the experience of the outdoors. The early childhood that I spent in Ceylon has perhaps created memories that now permeate my work. And in looking back unknowingly I painted open spaces even when living in London; looking for what is intrinsic in landscape.” Richard Cook